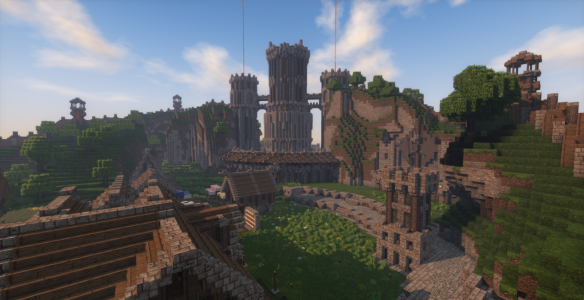 Windvale is a great Dwarf city and Faction founded by Grumfisst.

The Dwarves of Windvale/Kal-Buldur are currently the largest and most influential Dwarven faction on The Ancient World. Mostly a peaceful faction, they concentrate their efforts on assisting the world against the legions of Terth and attempt to maintain a united force against the dark god and his followers.

The town of Windvale was established during the beginnings of the Age of Exploration. What started out as a two house town developed over time to what you see today. In town, there are:

Windvale itself is a multiracial town. Dwarves, Elves, normal Mortals, Orcs, and others all live in relative harmony together on the surface knowing that they are well protected in the event of an assault by Terth’s minions.

The entrance to Kal-Buldur is located in the town of Windvale and is easily identified by the large iron axe that adorns the front of the fortification. Dwarves are generally the only Denizens of Kal-Buldur, though will not hesitate to allow citizens of Windvale to take residence inside in times of misfortune or siege.

The halls of Kal-Buldur are a long way from completion yet. Until the day it is complete, the sound of metal banging on metal will echo through the halls.

Windvale & Kal-Buldur fell into ruin after an undead invasion during the Age of Ruin.

This is a list of all residents of Windvale, whether they are currently living or have lived there in the past.