Revan is the God of Wealth. 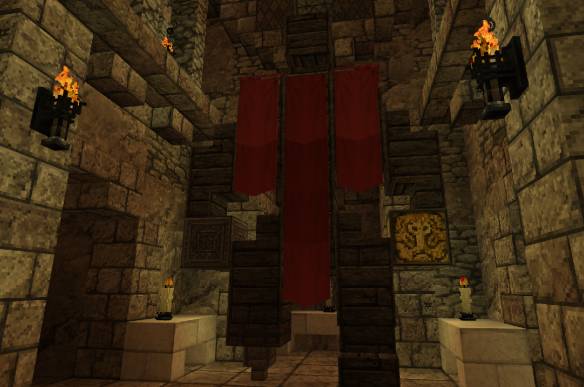 As an Ancient Eulorian, Revan built his first home in the side of a mountain, across the lake from Drakortha’s Estate. With a lot of work, clearing the feral beasts that lurked in the area the dirt, and the stone, he established his permanent residency in what is now known as Mount Euloria. He expanded his home into a small port village, respectively known as Port Euloria, although he was the only resident. For what seemed like years, he went to and fro, collecting resources and defending himself against wild wolves and other animals that would see him as their prey.

Then Drakortha, and a few others, sailed out across the ocean and discovered Eternal Island. Eternal Island, thought only to be a myth, was an island known for its seemingly endless nights. Some spoke of the legend in which a settler once landed on the island and could never escape the clutches of the darkness. He was never seen or heard from again. Upon discovery of the island, it was shown that the nights… were in fact not eternal at all. It was deduced that this was a crazy legend meant to scare settlers away from its treasures. Or perhaps the darkness has passed, to once again plague the land centuries later? No one knows.

Some months in after settling, an effort to clear out the hostile creatures on the island was made, and at one point, a large Creeper lair was stumbled upon. Eventually they were defeated and above ground was safe. Eternal Island became a bustling community, but over time was abandoned, now claimed by the hordes of the Nether. The Ancients never speak of it, for many settlers lost their lives during the Great Exodus.

Revan cut his losses and returned to Port Euloria to continue work on his projects. The pain of losing Eternal Island was so great that he sank into a deep, dark depression, and got lost in his own mind for many centuries. He imprisoned himself in the confines of his own dark thoughts.

Revan was among the Ancients that ascended to Godhood at the dawn of the Age of Gods. Any potentially existing records detailing the exact series of events are, as of now, undiscovered.

Learning that he had the power to bestow wealth, Revan proceeded to aid a particular villager in need. Revan, then, gave the man a stack of iron ingots as a sample of what was to come for followers of the faith. They built a shrine, dedicated to Revan, and gave him offerings in return for what they so desperately needed. They proceeded to build a statue as well. He was pleased by this. This village’s name has been long since forgotten, as was many other settlements, but many villages spread far and wide began to follow him. Some followed Monty, some followed Revan, and some followed Drakortha. In some cases, people followed all three. These lands were in The Shire, where Revan especially frequented and mingled with the Mortals.

Many years passed, and so too conditions of the realm. The inhabitants of the Ancient World would soon need the Gods more than ever. Gigantic Nether abominations known as Rifts cut through the lands and started consuming the terrain and people of the lands. Rifts are the God of Darkness’ way of assaulting The Ancient World from his own Realm. Terth has been in existence for eons, however he was especially active during the Age of Rifts, shortly after the Age of Gods. His name was not known during the time of the Age of the Gods, and only actively, openly declared war with the start of the Age of the Rifts against the Mortals. The Gods became powerless during the war and we were forced to retreat from the mortal world, and Terth’s forces freely roamed the lands. The Shire was completely annihilated and this disheartened Revan further. He couldn’t help his people any further, despite his efforts to rally the Mortals against Terth. The tentacles of flesh and the tormented souls of the fallen, along with Nether demons ravaged the landscape, taking with them the souls of the ones who perished and their homes.

While Revan was aware of the Super Rift, he was completely powerless to help them against the deadly hordes. He watched on in horror as his people burned to a crisp, were stabbed, or otherwise horrifically killed. This unnerved him greatly and caused him to retreat into the recesses of his immortal mind once again for seemingly a few hundred years, trapped with his deepest, and darkest thoughts. Eventually the Mortals would defeat the forces of Terth and build anew, but he would have no way of knowing. Slowly, he regained his power in his mountain retreat at Port Euloria.

The Age of Rifts and the Age of Undead passed by him almost completely, as he was oblivious to his surroundings and the suffering of his people. He merely had a small glimpse of anything happening during the Age of Gods II from his mind. The people didn’t need him anymore, they had the Demigods. He observed, though very briefly, the battles for the Tome, and made very small appearances, but for the most part stayed out of the way.

Terth eventually returned, and…apparently as other people recall, attacked the capital city “The City of the Ancients”, and completely destroyed it, and with it the lives of countless mortals, which resulted in the aptly named “ppCity of the Dead[[“. It is said that Ethendel, the Lord of War, fought Terth in person, whilst teleporting the remainder of the people to safety. Revan admired this, but continued to submerse himself in the shadows. He would go on, only materializing in his own realm away from the world, for that is the only power he had. He tried to devise a plan to keep Terth at bay from then on. But the Age of Darkness was upon the people, and Revan was powerless to help. For reasons unknown, he materialized in the underground Dwarven fortress of Ironhammer as a Mortal.

Revan was given a house plot, where he’d stay and live in his quarters, but only for a short time. He mingled with people here and there, but kept to himself for the most part, still trying to devise a plan to fight against Terth. The hordes of the undead were way too powerful. Rotting figures of flesh and bone, wandering around as a constant reminder of the darkness. The world was under Terth’s rule now. Revan was reduced to having only a mortal body. He could not ascend into an immortal body. He eventually gained enough strength to leave the Mortal world behind , and the Mortals had to fend for themselves once again. He only heard of the events that took place. He couldn’t recall ever taking active participation in the Battle of the Bridge, nor the Fall of Ironhammer, which was evident to be imminent one way or another.

The Age of Continents soon dawned on the realm. More continents were discovered, by way of Mortals running out of rations and landing on the first islands they located in the mighty oceans after the Fall of Ironhammer. They discovered Dagon Fel, in which Revan never laid foot on. He however did tread in the streets of the place that would become Port Orange and walked the island of Sadrith Mora. He was certainly impressed by the Mortals’ achievements, despite overwhelming hopelessness the age before. He was not present during the Age of Orrostar, although he heard many tales of the Super-Rift that engulfed the many lands in the region. Supposedly there were those who fought against Terth and braved the cold on the mainland. It is uncertain as to the successes of these Mortals, however it is known that Light eventually returned to the lands.

With Revan still in deep depression as the centuries rolled on, he lost a lot of time that could have been instead utilised for helping the Mortals in their fight against the great evils, and inspire his followers. Not many people had hope of the Gods anymore, thus Revan still felt useless. The Age of Orrostar came and went, just like the others. Revan simply stopped caring. He was not needed.

At some point after the Age of Orrostar, a cult known as the Revanites formed, who followed the teachings that Revan instilled in the Mortals many moons ago, during the first Age of the Rifts, during their valiant battle against a Super Rift, before it consumed the Shire. Knowing this, he regained a little bit of hope in his abilities as a God, happy that people still followed his word. Unfortunately, this cult ultimately fell apart. His bout of depression was not as great in these days as before. People still paid tribute and worshipped him, and this was enough to keep Revan around for a little while. He was caught off-guard by the Dual Betrayal, and not knowing what to do, he panicked. He could not comprehend what had been happening. The only way he could help people now was to fight his internal demons, which have been taking over his light. Revan never knew that he was, in-fact, battling Terth in his own way, not in the physical.

This battle was probably considered one of the most important conflicts, in which Revan battled Terth in his mind and his immortal soul. Terth had been slowly corrupting Revan’s mind over the course of several centuries, hence the lack of helping his people since the Age of the Rifts. Perhaps it had even started during the early days, in which Revan became a God. This was an internal struggle in the battlefields of Revan’s heart, mind, light, and soul. He was losing ground to Terth, however when pushed to the edge, Revan would strike back just enough to keep Terth at bay from taking him over completely. This ultimate duel lasted for many centuries, and in some instances, when the Mortals and Demigods defeated Terth, gave Revan some power back. The internal power struggle was violent, and his internal guardians were falling by the numbers.

His morale was almost nonexistent. He was, for the lack of a better word, dying. The Mortals did not know to which extent they were losing their God of Wealth, but one thing was certain, the darkest of days tended to outweigh that of the days of the Eternal Light. He continued battling Terth for dominance. This was The Battle of the Wealthy Mind, quite simply put. Ultimately, Revan pushed back Terth and kept him in a corner, in which he stayed, because he had to gather strength against the Mortals once again.

During the Age of Silence, Revan had enough strength to eventually return to the Ancient World sometime closer to the Age of Exploration. Terth had been pushed back and has been absent during this time. When the Age of Exploration was dawning, Revan made his full return, God status almost in full. His return brought hope to many, as did the return of the other Gods, like the God of Air or Water, for example. The people began to worship like normal and Revan started on renovations at Port Euloria, and is considering making a second city for the Wealthians to survive and thrive, for he wants to provide for his followers.

Recently a Battle against a Rift happened at Blue Peaks, and Beastmasters Abode was mostly consumed by the Rift and overrun by hordes of undead henchmen, however a brave few fought them back. Terth’s power is still quite diminished. Revan and the other Gods prepare for Terth’s next incursion into the Ancient World.