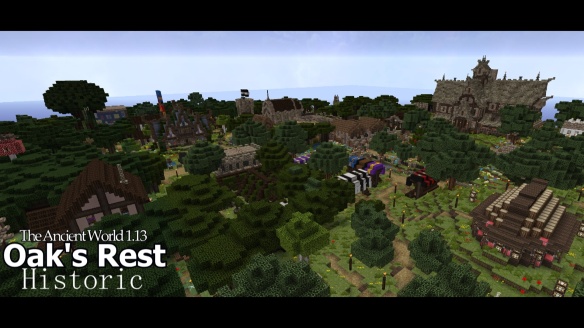 The Majority of Oak’s Rest was destroyed during Age of Rifts 2, with the remaining structures being fortified with a large wall to hold back Rifts. The area was then appropriated renamed to Fort Oak.

Oak’s Rest consisted of many player homes, shops, and services, including (but not limited to)

Oak’s Rest was home to a diverse group of factions, and it was agreed upon by all inhabitants that the town would remain a peaceful zone.

The township had no central government and was ran by the inhabitants, with any disagreements handled swiftly and with maturity.

The township also welcomed any newcomers to build, though it was recommended to build within an appropriate style (see the existing buildings for inspiration).

Out of place bases, like huge towers and fortresses were forbidden at Oak’s Rest.