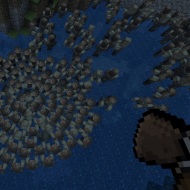 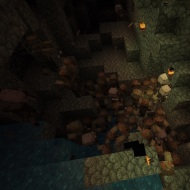 Marked by a black sun and perpetual night, the Age of Undead” saw massive zombie invasions upon the world with the increased amount and intensity of the zombies being spawned.

Terth Spawned hundreds of dark minions from a portal in the ruins of the defeated “Shire”. The entire mainland of the Ancient World was swarming with deadly creatures and all mortals were terrified at their numbers and strength. What were they to do but try to defeat them and many met their rapid death. Zombies and skeletons were everywhere and only brave and clever mortals lived to see another day.

They needed to badn together and work towards a common goal to protect themselves from this enemy. They hid in fortified castles waiting out the dead. Travel was very dangerous. Food became scarce (because crops could not grow well in the cold) and some starved to death. Many mortals made themselves sick by eating rotten flesh as a desperate attempt not to starve.

The weather was so extreme that others froze to death. Skeletons shot arrows that destroyed buildings and Mortals had to rebuild their fortresses. Something had to be done and so the strongest warriors gathered to battle against the undead. After a year of warfare against these evil zombies and skeletons the mortals defeated them with skillful operation and orchestration.The enemy was defeated, concluding the Age and beginning the Age of Gods II.