The Age of Orrostar denotes the escape of Mortals to Orrostar during a particularly severe incursion of Rifts. This Age marked the discovery of Orrostar, which is the largest of the Continents, second only to the Mainland in scope. 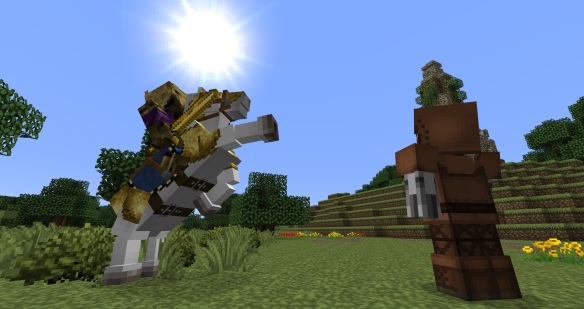 an Ordinator on Horseback

Initial Beachhead and the Life Grove

“The Age of Orrostar” began with the pirates of The Fleet landing at what was soon to be called Pell’s Gate, where all the people had escaped Terth’s grasp. They created a small settlement. Eventually, they spread out to see more of the land. The pirates who brought the people eventually sailed off, never to be seen again.

Near the center of Orrostar was a place that appeared to be very beautiful. It was lush with a magical kind of landscape. In the very center an enormous oak tree grew. Mortals were very attracted to this place not only because of its beauty but because of its tranquility.

In time, a figure appeared almost as if it came out of the tree. It was a familiar to them. It was the God of Creation:, Drakortha. In his honor, this place was named the Life Grove. It appeared Drakortha had been here all this time escaping Terth’s evil path. During this Age, Drakortha would accept offerings from mortals on the top of Orrostar’s highest mountain. Some continued to be drawn to the Life Grove but others left to seek their independence and create new towns and villages.

In one particular village called Rogue’s Trail, inhabitants had performed technological feats instantenously, despite having no experience doing so. They were called the Ordinators. They burned their old armor and created extremely detailed, gold plated armor despite having no previous experience doing so. They rode horseback throughout Orrostar claiming they were “advocates of Drakortha’s will”.

It was peaceful for over a century in Orrostar until one day, at a gathering of folks at Life Grove, a god appeared.

As it had always been before, the this god was assumed to be Drakortha. It was rare for Drakortha to appear for a public speech, for he did not appear often.

Upon their gathering, they realized this god was not Drakortha at all. The creature was in fact their worst nightmare: Terth!

Shocked by the truth the people realized that Terth had tricked them all along and for years it was all an illusion. Terth had been building up his forces, using the peace to gain strength. At that point Terth had become a very powerful entity. The Ordinators, defenders of Drakortha, suddenly gathered together and struck Terth.

The all powerful and angry Terth then brought forth his avatar, the Ender Dragon, sending it flying into the sky and breathing fire below. This appeared to be the first time he had manifested a dragon outside of the End. The dark dragon attacked the Ordinators and they fled like cowards, never to be seen again.

The Ender Dragon headed to a town in Archwind Keep in Orrostar, which was a large castle built by Dwarves. Terth and the dragon summoned a “Rift” which frightened them and created great destruction. The Dwarves put up a good fight but the winged dragon was much too powerful to defeat alone. The impenetrable fortress was no match against Terth’s mobs of skeletons and zombies, either. It seemed hopeless even when allies came from distant towns and tried to help by defending the castle.

Fortunately a group of Crusaders located and destroyed the heart of the “Rift” and many troops protected the walls of the castle. The plan to capture and destroy the heart of the Rift was a success, because they worked together and fearlessly faced Terth at his strongest.

Thus began the Age of Silence.

This Age began on a large new landmass, with the option for players to visit the old mainland and continents via a boat at Pell’s Gate.

The server introduced the Towny system for the first and last time, replacing Factions. This led to each average settlement being larger than the server had seen before, and larger town groups rather than smaller factions.

This age also experimented with a new system of Moderator role, where the Moderators were a larger group of players with less admin abilities. The goal was to create a less intrusive way to Moderate the server, though ultimately due to the large size of the group and fact that many members weren’t trained properly for the task, this experiment failed and the server returned to traditional moderating thereafter with a small group.