The Age of Order begun shortly after the end of Age of Exile upon the mortals return to the Ancient Realm.

With Terth exiled from the realm and imprisoned on Shaurekoth Durn, this Age brought new life to the world and allowed for the wounds from Ages past to finally heal. It began with the healing of the landscape, which was battered and torn. New coastlines forming, vast forests regrowing, new lakes and rivers forming, as well as biomes shifting. For example; the entire region of Blue Peaks defrosted and became a temperate spruce forest and Sadrith Mora inherited bamboo jungles and new wildlife such as panda bears, and so on.

For Mortals, it kicked off with plans of a new city to call home. So they hit the southern coast of the old mainland and began construction of a new city that would become Voyager’s Wharf. 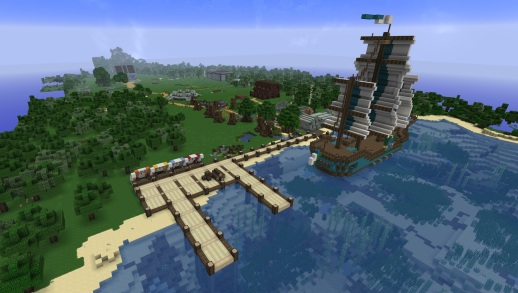 The Mortals goal for the world was to take the current peaceful state of the world as an opportunity to tame it and bring about a new civilization, and thus moving themselves towards a golden age of law, order, and prosperity for all.

A new god rose up to become the champion and idol of the people. He would become known as Vaestian, Lord of Order (or God of Order),

Unlike the other gods of the realm, Vaestian did not descend from the heavens or hail from another realm. Vaestian rose from the ashes of our great ancestors of the past, and his singular purpose was to serve Mortal-kind in their newfound quest. Risen Alongside him were the Ordinators.

The Ordinators were the eyes and ears of the Lord of Order, Vaestian. As well as his left and right hand. They were there to maintain fairness and order in the land.

Phaelle, Goddess of Light was the 2nd deity to appear during this Age. But unlike Vaestian, she descended from the heavens above and made promises to the Mortals that should darkness ever return to the land, to seek out her light and she would protect them. To prove her devotion to serving the Mortals, she banished the Phantoms that were assaulting Voyager’s Wharf each night since it’s construction began.

Shrines to Phaelle & other gods were constructed around the world as well as in the City’s Cathedral.

While things seemed peaceful in the City of Voyagers Wharf, something sinister was happening under the residents noses. A unnamed man who called himself Mr Trustme was found guilty of multiple grizzly murders – all of which took place within the city walls, in a secret dungeon under his home.

When rumor got out of the murders, the Ordinators went to investigate. Unfortunately for them this was part of Mr Trustme’s plan, and he was prepared for them.

And so the City Fell into Disarray..

The Ordinators having lost their only surviving senior Ordinator, the City of Voyagers wharf was without Order. And so the cities population lost faith in Vaestian and his promise.

Over time, The Lord’s City was abandoned. The cities population dissipated as it’s once citizens chose a life of banditry, villainy and wilderness pillaging over Vaestian’s promise of a new Age of Order.

The magical barriers that once protected Voyagers Wharf and many other locations around the world began to disintegrate. Ships that were once used for transportation raised up their sails and set off either in search of different lands or to turn to a life of piracy. And the once vibrant city fell into disarray.

The Promise of a Golden Age was over.

Thus began the Age of Ruin.