Dark Moons are infrequent events which occur on The Ancient World during times of ruin and decay. They will usually start off relatively weak, but can become progressively more powerful over time and have even advanced into a persistent state for the world in some extreme cases where the world was blanketed in perpetual darkness and an eventual drop in temperatures – resulting in the world becoming an unforgiving frozen wasteland.

The Dark Moon is affiliated with the Undead and is a source of great strength for them. They, who would normally reside deep beneath the world or in dilapidated ruins, take the Dark Moon as a prime opportunity to continue their Ancient war against the living. The darker and longer the nights are, the more powerful the Undead become – eventually allowing them to venture out from their hiding places to seek out the living. 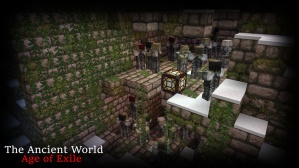 When player settlements are lost to invading forces they become ruined zones that the Undead will use for their own purposes, such as a staging area for more attacks. For every settlement that is lost, nights may become longer and the undead will grow stronger. This can multiply many times over with each loss mortals sustain, until the undead become an unstoppable force that dominate the overworld in perpetual darkness. (see Age of Undead or Age of Darkness)

For living mortals to overcome this impending darkness they must take whatever measures possible to fortify their settlements against attacks. It’s recommended that this is done earlier rather than later, to avoid being overwhelmed by impossible odds. This can be done by replacing weaker blocks with stronger ones, introducing lava moats, traps, and other perimeters. Defeating the undead at their every attempt can eventually thwart their advancement as they lose power and decide to seek out other target opportunities.

The Goddess of Light

During the Age of Order a Goddess revealed herself to living mortals as Phaelle, stating she was to be their protector and guiding light through the coming darkness. Some believe that building shrines to her, leaving her offerings, and fighting in her name brings her greater strength – allowing her to assist mortals in their fight against the common enemy.